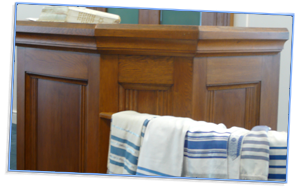 Jewish attitudes to conversion vary. In the Bible, the Book of Ruth indicates both that conversion was commonplace with her simple declaration ‘Your God shall be my God, your people my people’. In later history when most Jews lived outside the land of Israel and there were hostile relations between Jews and their neighbours, conversion became harder or was discouraged.

Aspects of both have persisted in modern times. Many Orthodox synagogues regard conversion as undesirable and discourage would-be converts. Reform Judaism is not missionary but sees no reason why a person should not become Jewish if they wish.

The requirements for conversion are sincerity, knowledge and participation. We offer conversion courses that involve 12-18 months of study. It is also important that the person attends services and participates in other aspects of communal life. At the end of the course, the person appears before the Reform Beth Din (rabbinic court) which regulates conversion and other status issues. Males are expected to be circumcised, while both men and women will undergo ‘tevilah’ – immersion in water to signify their acceptance of the Jewish way of life.

There are no upcoming events.